Greetings thrifty earthlings! Hope everyone is benefiting from the same glorious weather we've had here in London for the past few days. A lovely friend of mine looked after smallest boy for a few hours on Friday, and in addition to boring household chores, I was able to have a more leisurely than usual stroll around the charity shops of the area. Naturally, this being the UK, the temperature nudges above 12 degrees centigrade and convertibles are brought out of hibernation for their annual outing, men are shirtless outside the pub, and women start dressing for the set of a MTV video shoot. Obviously I'm not entirely immune to this phenomenon, my first finds being a cross between Copacabana and Kanye. 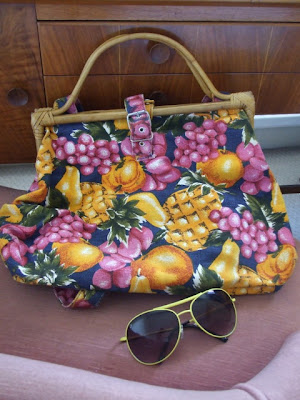 Loving the tropical fruit on this rattan framed bag £3.95
Vintage yellow aviators £2.95
Things were slightly more restrained and Spring-like in the next shop, where my eye was caught by this Sadler coffee pot and cute vintage cruet in the shape of owls. I bought these with the intention of selling them on - I'm thinking of starting an Etsy shop and I know owls are perennially popular - but I'm a bit taken with them since I got them home and they're sat on a shelf. How do re-sellers part with things? I have a ton of stuff I've vaguely thought about selling but that mysteriously seems to have taken up residence. (This could explain why I was able to take 5 glass cake stands to the bake sale at my toddler group recently...) 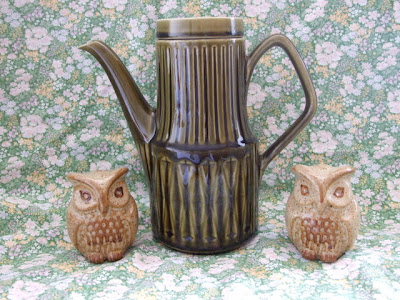 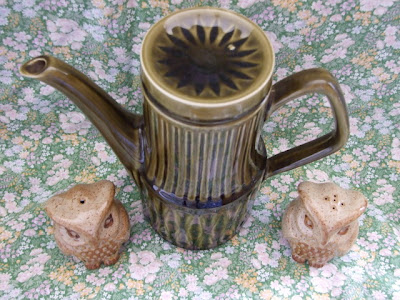 Wise guardians of the coffee pot 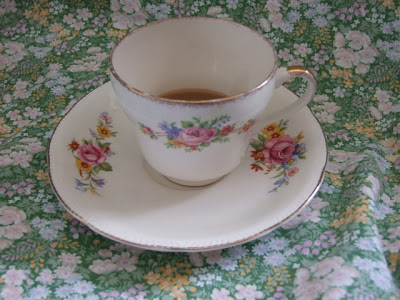 Pretty floral teacup and saucer 50p. Joining the ranks for candle-making
The fabric behind the china buys is from a vintage St Michael double flat sheet. There's loads of material so someone with the know-how could easily make a dress. It would certainly be cheap enough to practise on, so maybe I'll hang onto it for a first attempt. Otherwise it will provide several million patchwork squares or a mile or so of bunting.
I did pick up a sundress from Boden as well, but that's destined for Ebay. It was quite expensive but is absolutely right for the season so I'm hoping to make a little profit from it without feeling like I'm ripping the charity off. Also, it's a bit big so makes me look pregnant. Not a look I need 3 years from my last baby.
Finally, it's possibly my favourite buy of the week. Even if you can find it in 100% cotton, children's character bed linen is generally pretty hideous. I read all the aspirational home magazines and always wonder if Cosmo's Ben10 duvet cover was mysteriously in the wash the day that Country Living came round:


"Sorry darling, mummy accidentally spilt coffee on your bed , but never mind, here's a vintage hand quilted eiderdown instead! Oh, and I've put all your transformers in the attic. Just for today, let's pretend your favourite toy is this artfully distressed wooden dog on wheels!"
Anyway, also on the linen rail was this cotton sheet, starring everyone's favourite alien. No, not Seven of Nine from Star Trek. E.T.! The sheet has these iconic pictures from the film - which is nearly vintage by Etsy standards, as it was released in 1982. 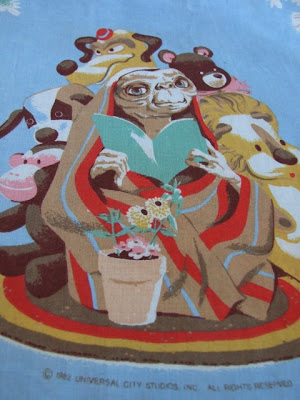 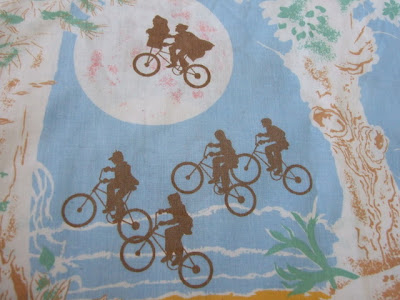 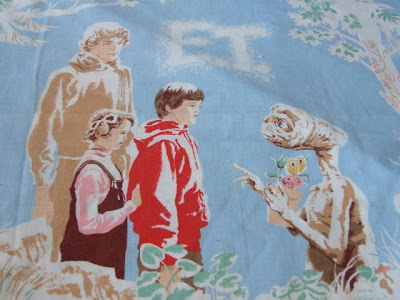 'Home'. Sob, sniff etc.
I don't know if it was originally in such a nice muted palette or if it's faded over the years, but it's super soft and clean and as it was only £1 it came home with me. I don't do hospital corners so it's unlikely to end up on either of my boys' beds, but I might staple it round some canvasses and make art for their bedrooms, or use it to make cushions. Failing that, there's always the fantasy Etsy shop...
[note to self: avoid key words 'Drew Barrymore' and 'bed'. Could attract the wrong sort]
Lakota x
Linking up to as usual to Flea Market Finds
The Penny Worthy Project
Thrift Share Monday
Magpie Monday
Nifty Thrifty Tuesdays
Twice Owned Tuesday
and
Penny Pinching Party
Posted by Lakota [Faith Hope and Charity Shopping] at 18:47