Guess who's back, back again?

Hiya. Yeah it's me. I got into drugs, went to rehab, got clean, put out another album, bitched about the critics and found that Kanye West had stolen my thunder...Oh no, wait, that's Eminem. I'm just using him as a sneaky way of bypassing long explanations and justifications as to where I've been. I'll probably get round to that. But if anything could haul my arse out of hibernation it would be the prospect of a blogger meet-up in London town. And not just any old meetup, but a super transatlantic inter-city multi-national one. It was gritty, but glamorous. And if Film4 made it, it would be called: 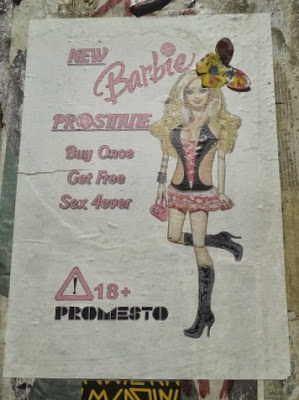 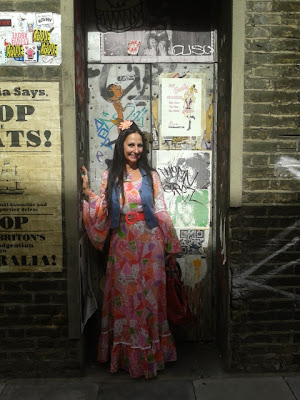 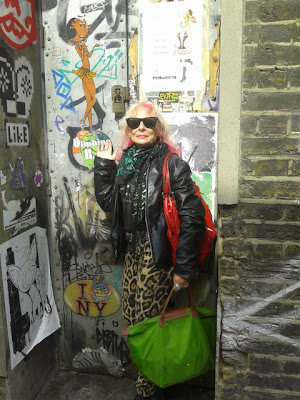 SUZANNE!
The broad from abroad 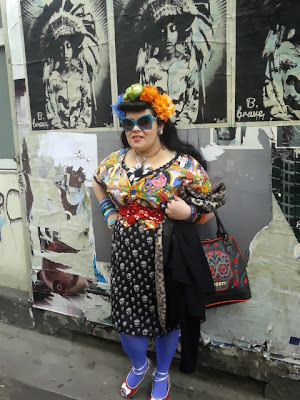 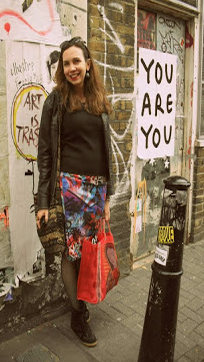 I wore my graffiti print skirt, it's not that I stood there too long

Terrifyingly - to anyone who has a passing familiarity with my sense of direction - I designated myself tour guide and dragged everyone off to Shoreditch. Now, as any fule kno - the East End is no longer synonymous with the denizens of The Queen Vic (or Jack the Ripper, or the Krays) but is the natural haunt of the hipster in London. Locals are used to bearded men in cardigans putting up flyers for vegan crunk nights*, girls with undercuts and 80s batwing jumpers get barely a second glance. However, being out with these three was like being out with some kind of rock supergroup. Or possibly Courtney Love on the razz with Harry Styles. Seriously, we got stopped and asked for photographs. We got sneakily papped while we ate pancakes in Spitalfields market. We got cat-called [once by crackheads, admittedly. But one of the Indian restaurant owners was very taken with Vix, calling her his 'tropical banana'. All these guys ever say to me is 'come in, come in, lamb bhuna is on special today']. I think I need to make more of an effort. 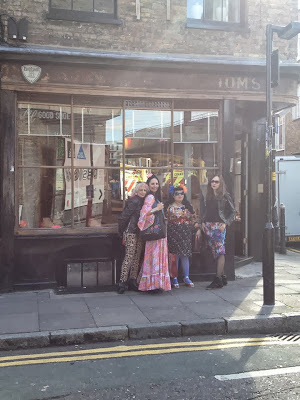 Suzanne claimed the bargain of the day at Absolute Vintage - a £1 cheongsam languishing in their bargain bin. [My £4 version is here]. No doubt they doubted their chances of finding someone tiny enough to fit in it outside of Hong Kong - seriously, it was weeny - but as you can see it looks incredible on her. 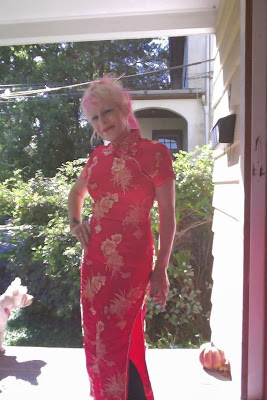 
Another highlight was finding a subterranean vintage market held in the old Victorian public toilets. Dora and Vix bought skirts while I wrestled with my ever growing attraction to 80s goth prom dresses. I blame my addiction to John Hughes films and the fact that I was 13 when the decade ended - I didn't get to wear any of the fun stuff. 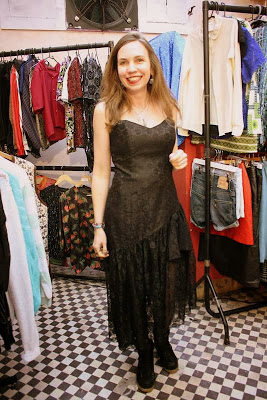 I didn't buy it, even though the lady offered to knock a tenner off. It was a bit big and also cut so I'd have been flashing my gusset with every step. Leggings would have solved the second problem but I'm not enough of a needlewoman to start attempting to take things in.

Despite proclaiming that she wasn't shopping, Vix got a fabulous skirt for a ten quid (pic on her blog), and I felt strangely relieved that the queen of thrifty vintage managed to find something in the smoke that wasn't too ridiculously priced. These Topshop sequin shorts were quite fun (found at another vintage market on Brick Lane), but I think I'll be able to find them cheaper on eBay: 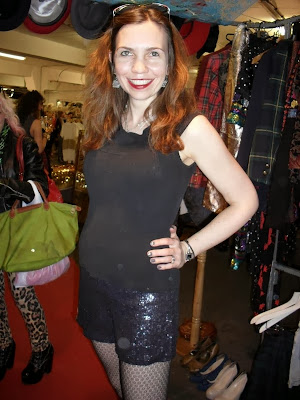 Awkward grin. Cameras still freak me out.
I like black. Matches my cat.

I did get a denim waistcoat a la Vix for £4, but the best buy from here was Dora's 'Blade Runner' shades. Excuse me for going all Project Runway for a minute - but FIERCE! 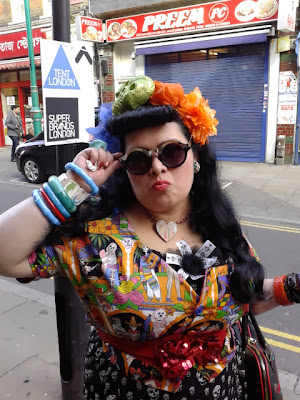 Why yes that is a chartreuse glitter skull on my head, thanks for noticing.
Can you believe someone actually asked her if she'd ever been to Mexico?

It was great to meet 3 such incredible women who are just as cool as their blogs would suggest - thank you also for the wonderful gifts (I had a mild and as it turned out totally justified panic about this before I left - my main excuse is not having left the house in a week aside from school pick ups. I will reciprocate somehow). If anyone else is planning a London trip and fancies meeting up do give me a shout via my blog email - I am checking it again now!

Hmm, 40 million blog posts to read. I may be some time.