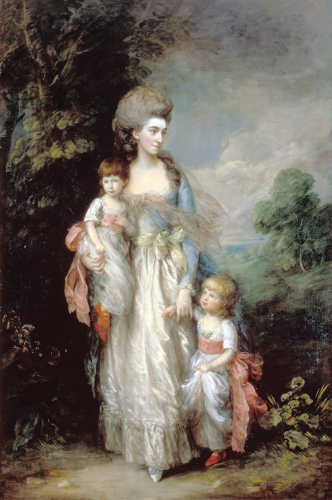 ﻿I visited the Dulwich Picture Gallery recently, and found myself transfixed by this Gainsborough portrait. I had the small boys with me - they'd been fortified with chips in the cafe - and of course they assumed Samuel and Thomas were little girls. Understandable, as boys in the 18th century would have worn dresses like this until they were at least 5. You can imagine how my Year 1 boy felt about that! Despite having more than a passing interest in vintage clothing, I'm still intrigued by how my own perception of gender is shaped by our modern experience of dress.

However, what really fascinated me was learning that x-rays have revealed that orginally, the portrait was of Elizabeth alone, her hand raised, playing with a string of pearls at her throat. This original has been dated to c1780. She died in 1782, when her sons were mere infants - Samuel was born in 1781, and his brother the year after. The painting was modified after her death to include the boys, held by their mother at an age she never saw them. Would Samuel and Thomas have grown up adoring this last connection to the mother they would never know, as we cling to photographs of family members we have lost? Or did it act as a memento mori - remember you too must die?

We're all vintage lovers, but who today feels connected with the morals and mores of 230 years ago? With modern tools such as Photoshop we could recreate with a few clicks what Gainsborough so painstakingly repainted. We've seen the late James Dean advertise cars; Marilyn, Einstein and Elvis still pop up - their images used long after their deaths - but would we doctor a family photograph?

The reason I ask is connected to a pair of photos I'd like to show you, from my own family. This picture is my maternal Great-Grandfather George as a small boy, posing in his sailor suit with a rather skittish looking stuffed horse. I'm not sure when it was taken, but I would guess at around 1900. 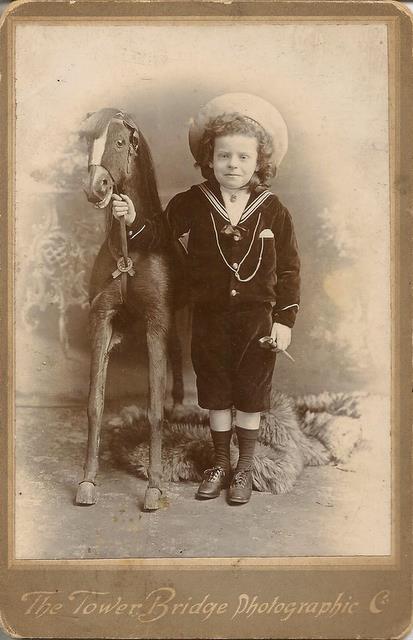 Look at his buoyant curls! Why, he could almost be a girl. In fact, George had a twin sister, but she died in infancy and his parents' would never have a picture of her girlhood. Oh, wait a minute...here's one: 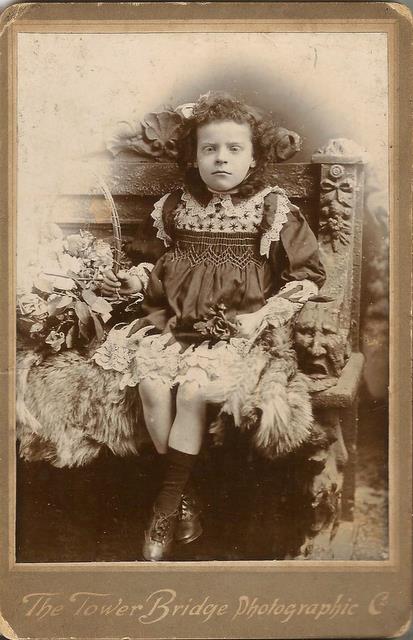 Yes, it's George again, forced into a frilly dress and with the most truculent expression on his face. I've known about these photographs for a few years, but was reminded of them immediately that I saw Mrs Elizabeth Moody... However, I only today realised that the basket he's holding contains bay leaves, which in the Victorian language of flowers means "I change but in death". I'm not sure what parent would today dress their son up as his deceased twin sister - I imagine in modern parenting terms it's a no-no - but I can understand their need to keep a connection with their daughter. And who knows, maybe George later found comfort from it too, as the Moodys did from their painting, a century before.