The Weekend Book - then and now

A couple of years ago I bought a book entitled The Wonderful Weekend Book: Reclaim Life's Simple Pleasures (by the late Elspeth Thompson). It was what I'd describe as a 'Sunday Supplement' type of book, lovely to read and aspirational, but I'm not sure I'd remembered a great deal of it since my first perusal. However, I was reminded of it recently when I found this 1928 edition of The Week-End Book (first published in 1924) at a car boot for 10p, and I thought it would be interesting to compare and contrast the two. Would ideas on how to get the most out of your weekend have changed, or have things come full circle since the roaring twenties? 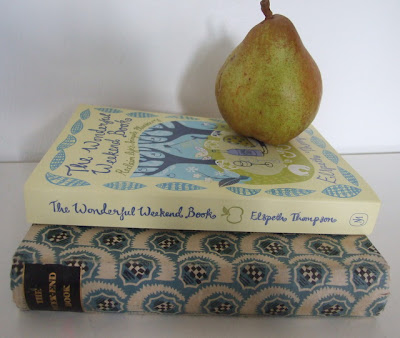 My original 20s book was actually reprinted in 2006 and is available from Amazon, although rather naughtily none of the information they give makes it clear that it's a reproduction and that all the information is some eighty years out of date! However, I suppose a clue could be gleaned from the quoted reviews - if you were paying attention:
'Everybody is talking about it...I wonder how I ever spent a week-end without
it...It will go with us wherever the Oxford Book of English Verse goes.
The authors have thought of everything' - Daily Telegraph
'I say! Have you seen THE WEEK-END BOOK?' - Guardian
'The jolliest all-round companion that has appeared in print for many years' - Evening News
Sadly The Oxford Book of English Verse is no longer considered an automatic travelling companion for a weekend away, despite the editors' suggestion that it should be 'carried in the opposite pocket' to their own publication! Indeed, The Week-end Book does not skimp on the poetry, and offers a multitude of lesser known verses, under the headings 'Great Poems,' Hate Poems', 'State Poems', 'Epigrams' and 'The Zoo'. 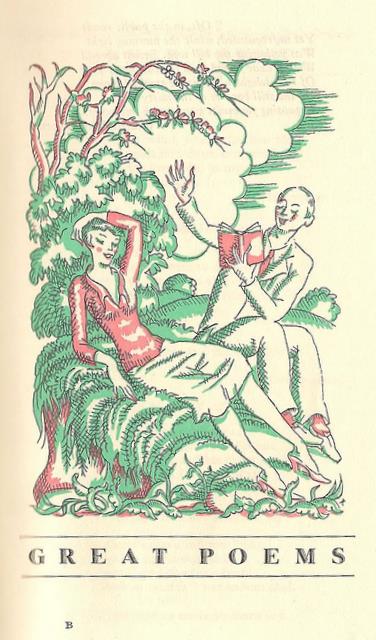 *******
There is also the assumption that every weekend gathering will end in song, and the scores and lyrics for numerous - now obscure - ditties are also included.  My karaoke obsessed former neighbours also liked to round off their weekend that way, although they never sang 'O Good Ale, Thou Art My Darling'. [This did appear to be the case, however]. My modern book doesn't include poems and songs, but one of the author's suggestions for a weekend activity is to 'Start an Anthology'. She had recently found the hard-book notebook where she collected favourite quotes, lyrics and poetry during her teens, and I like the idea of being your own editor, and compiling a miscellanea that's completely personal - even if mine would have just been full of Pearl Jam lyrics and quotes from Heathers.
Here's the blurb for The Wonderful Weekend Book :


"It's the Weekend!
Forget supermarket aisles, traffic jams and chores.
Instead, reinstate the tea party, write proper letters,
celebrate the seasons with local or home-grown food
and drink, or even take your neighbour's dog for a
walk. This book is packed with ideas that will help
restore the balance in your life, reconnect you to the
seasons and other people, and - quite literally -
not cost the earth."
Thompson suggests things to do year round - from the unlikely 'learn the ukulele' to the more achievable watching the sunset, and has chapters on 'seasonal pleasures'; filled with fairly obvious suggestions such as making chutney in Autumn, beach-combing during the Summer or learning to knit in the Winter months. She also campaigns to 'Bring back Sunday' as a day of rest and contemplation, and suggests switching off the laptop and going on an email and mobile detox for the day - not a problem back in 1928. Recipes for leisurely breakfasts, plus seasonal delights such as pancakes, Simnel cake, and marmalade are interspersed throughout, whereas the older book has an entire section on what to cook for your weekend guests.The recent 'Slow' revival would wholeheartedly agree with advice that weekend food is excellent when "put on before you go off to tennis or to lazing". 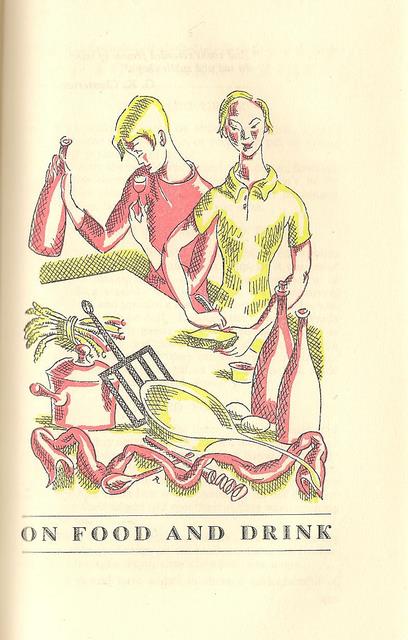 However, nowhere in the 20s book is it suggested that you spend your time making marmalade - the main piece of wisdom I came away with was this:
"DON'T cook and attempt to eat YOUNG BRACKEN SHOOTS because the Japanese do. What suits the hardy races of the extreme East may not suit you"
Oh, and I feel I should share these vintage cocktail recipes too, if only to prove that foolish binge drinking is not a recent undertaking for the Brits:
MR SUTTON'S GIN-BLIND (to be drunk with discretion): Six parts gin, three parts curacao, two parts brandy and a dash of orange bitters
RAJAH'S PEG: A claret glass of brandy in a pint of dry champagne
******* 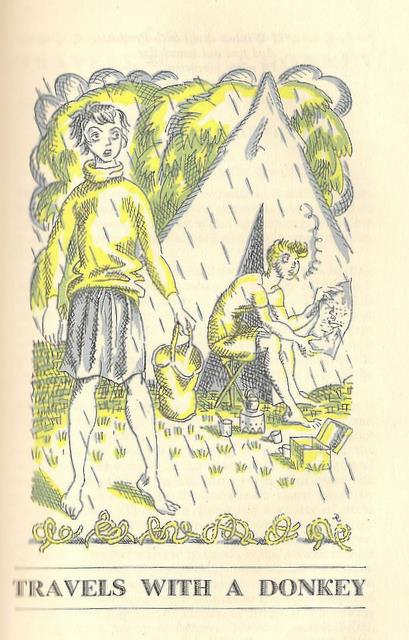 Camping or 'Travels with a Donkey' (not literally) gets its own chapter in The Week-end Book, and has maintained its popularity since. The respective lists of essential kit are pretty much identical - although a 'tea-infuser' was considered vital back in the day. The Wonderful Weekend Book has a couple of suggestions for games to play in the car en-route to your destination - the older book has an entire chapter on everything to entertain any number of chaps; and whether to be played on paper or with improvised sporting equipment, all are wonderfully complicated and archaic sounding - Tishy-Toshy or Up-Jenkyns anyone? Helpfully, the end papers of the book are printed to allow you to play Draughts at the front, and something called Nine Men's Morris at the back. 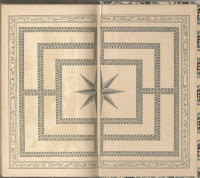 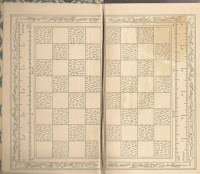 There are also blank pages to record your own favourite poems, recipes and games, as well as Favourite Inns and Train Times. 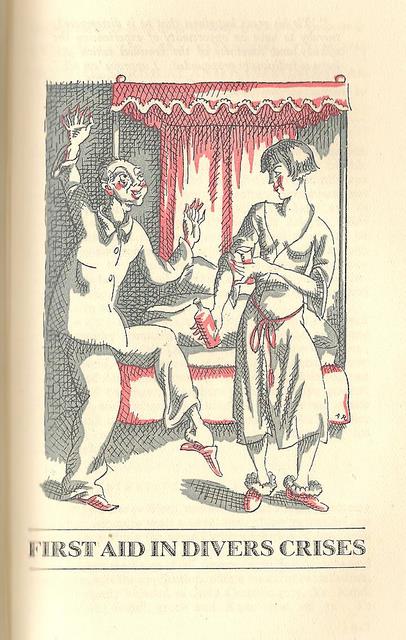 The chapter on first aid remedies one might require on a weekend jaunt is probably the furthest away from what we would recognise now. These days you might pack some paracetamol, and maybe a small kit with some antiseptic and plasters if going camping. In the 20s book the remedies are supposedly all things which you could easily obtain from a chemist without prescription - although these days you'd probably want a pharmacology degree.
"Good against the Sting of all insects, including Midges and Mosquitoes,
is the application, with a pencil of camel's hair, of an
analgesic blended of Acid Carbolic gr.v, Tr Iodidi mx,
Potass. Iodidi gr.x and Aqua dest ad 3i"
There is a lot in The Week-End Book which is pleasingly tongue-in-cheek, though I have no idea whether a 'pencil of camel's hair' was likely to have been carried in the same pocket as the poetry, or whether this is a joke!
*******
As shown by the newspaper reviews from the time, and subsequent new editions, The Week-End Book was seized upon as a marvellous idea and a great success. The modern book was generally well received, although a few reviewers complained that considering the onus is supposedly on 'simple' pleasures - the writer is fairly obviously writing for a relatively monied audience. It's all very well to suggest clothes swaps and buying second hand, but if you're having one of her 'quiet nights in', I did notice that her catalogue of lounge wear suppliers includes Toast, The White Company, Plumo and Celtic Sheepskin - none of which are a budget option. The Primark adult onsie does not get a mention. 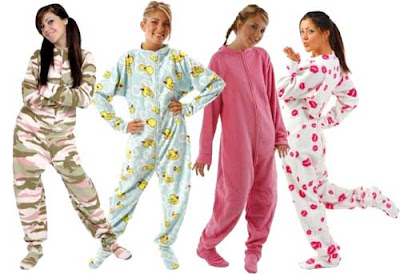 
Others took exception to her section on the 'problems' of having a second home - it is hard to have much sympathy, but it's only a small paragraph really, and she does admit that you can only really complain about the travelling/packing/traffic to someone else in the same position. Someone in living below the poverty line in Hackney might not be readily able to afford linen lounging pants from The White Company, but hedgerow foraging, mushroom picking and star-gazing - whilst technically free - are also not immediately easy to achieve if you live in a very urban area, no matter what your financial situation. I'm not sure you can write a book where every suggestion will be practical for everyone, so a lot of these complaints seem churlish to me.
If Amazon had existed in 1928, who knows whether we would also have seen reviewers complaining that The Week-End Book was aimed squarely at the upper middle class. Did everyone have a weekend cottage, or friend with the same? Did everyone have the same expanse of leisure time - unencumbered by household maintenance, or small children who would prohibit the playing of tennis and drinking of cocktails? It seems unlikely, but I like to think so - I just love the glamour of the 20s and 30s. Come and join me for Tishy-Toshy in the Country - I'll pour us all a Satan's Whisker* before the singing starts!