It's been a gorgeous day here in South East London, blue skies and scudding clouds. We've been at the park. As usual there's been the odd police chopper going over and the sound of distant sirens. Usually I'd only pay attention to the skies if my 3 year old said  'look Mummy - Hewwicopter!' , but today my friend and I were keeping more of an eye on the number going over. Our chat about our respective weekends - University reunion for her, friend's 60s themed wedding for me - was interrupted not only by children demanding snacks and drinks, but by texts and Facebook updates from concerned friends in the area. "Husband coming home early - it's kicking off in Bermondsey", "Youths gathering around the station". "South Norwood is next". I drove home and our local high street (pretty scuzzy at the best of times) was shut up completely at 3.15pm. Grilles down everywhere. I try to keep this blog amusing, but I'm so angry and upset right now.
We were all on Facebook and Twitter last night, trying to reassure a friend who could smell the burning and see the smoke from the out of control blaze in central Croydon - a century old family business set alight for no reason. A business employing 20 local people, by all accounts well known for its customer service. The fire soon spread to other buildings and we watched the news in horror - the area is also residential, there were houses and flats evacuated by terrified residents. I read on a local news website that one elderly widow has lost everything. 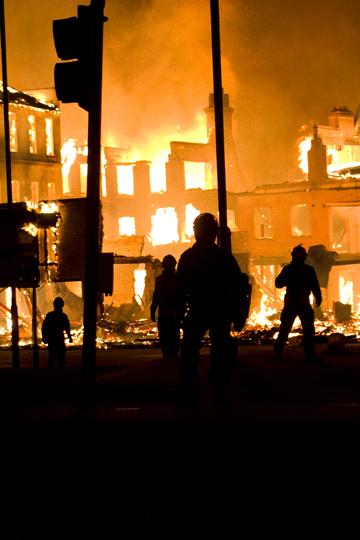 photo credit: Amy Weston WENN.com
Another friend works in Co-op - she went in this morning at 5.45am to start her shift, and soon reported that thieves had not missed their chance to take cigarettes and booze, knowing there was unlikely to be any response with the police force so stretched. This was pure opportunism - it's been targeted many times before, well before Mark Duggan's death, and before the so called credit crunch and subsequent cuts. I got home from the park, and a neighbour I'd not met before came round to tell me to stay indoors, she'd heard the high street would be next. So much is rumour, but there is genuine fear amongst many. Friends on a road five minutes from mine have just been on Facebook to report a stabbing -  this was at 7.30pm. The sky was still a beautiful blue.
I - like many of you - have spent hours glued to the news, opinion pieces and social media, trying to get answers. I know it's nothing to do with multiculturalism - the Turkish guys in Dalston defending their street surely prove that. I'm appalled by the outspoken racism appearing on forums once again - reference to 'Blacks' as though we're in the American South in the 1950s. I refuse to believe the casual violence and disregard for personal property - and indeed human life - by the disenfranchised youth taking part is related to the colour of their skin. These are images of people thought to be involved last night in Croydon, caught on CCTV. I don't know about you, but I'm ashamed of all of them, not just the ones who happen to share my skin tone. 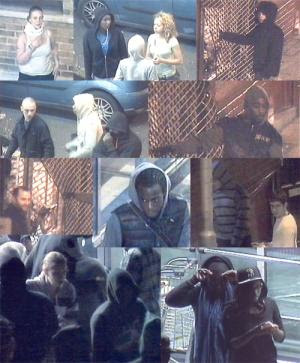 photo released by the Met.
Is it still anger at bankers' bonuses and MPs' expenses? Do the kids wearing balaclavas really think the balance can be redressed by stealing televisions? We've all been living in this culture of entitlement and rapacious consumerism - and those at the top of the pile and those at the bottom seem to exhibit a similar voracious desire for the new, the best, the most impressive - whether that's a yacht, an i-phone or trainers. Of course, we're all being taxed heavily, but this is not the Rebecca riots of 19th century Wales. Is it down to the lack of jobs for school leavers? Correct me if I'm wrong, but I somehow doubt those with ten A* GCSEs are the ones out stealing trainers and flat screen televisions.
There is a lot of 'blame the parents' about and this is to an extent valid  - I'm a parent myself and say the same - those of us with school age children see it every day. Of course, the vast majority of parents I've met since my son started school - those I choose to spend time with - are good honest people. Some are single mums, some are younger than me, some are older, some are unemployed or have a partner who is. Few are wealthy. A cross section of those on my phone and Facebook includes anglo-Indian, Vietnamese, Mauritian, Jamaican...most of them have lived here far longer than me. What we have in common is the ability to teach our children right from wrong, and respect for other people and the school rules.


Where it starts to go wrong is when there is no discipline for misdemeanours, or when parents don't allow the school to administer punishment. When these kids are allowed to run wild and subsequently have their own children, there is no chance for any kind of moral code to be introduced.  Reports are coming in from Manchester, stating that a whole family has drawn up in a car to loot a shop - parents and kids together. This makes me despair, sadly far more than the Twitter organised clean-ups bring me any joy. Hopefully tomorrow I'll be able to take more pleasure in seeing photos of beleaguered Brits with brooms - I know there are still good people out there.
I also had a minor Twitter disagreement today with a Guardian writer who was pontificating that we shouldn't be calling those who are taking part in this orgy of criminality 'scum'. Apparently this is classist and racist. I do not stand for or indulge in class hatred or racism, but I stand by my opinion that arson and robbery and mugging are scummy behaviour - no matter who indulges in it. How else would you describe throwing bricks at fire-engines attempting to get through barricades to put out burning buildings? I can almost understand - but not condone - how tensions can reach boiling point initially, but this sustained  level of violence is not to do with poverty or frustration - just the worst kind of hooliganism and greed.
I hope you all stay safe and our shattered communities can be rebuilt.


Lakota
Posted by Lakota [Faith Hope and Charity Shopping] at 21:29