The Mr and I celebrated 8 years of marital bliss last Tuesday, so being the thoughtful and caring wife that I am, I thought he'd like a look round a market and a load of vintage shops. Oh no, hang on...that's what I wanted, and he kindly acquiesced to my suggestion when I pointed out we could have curry for lunch and he could take his camera and get gritty East London shots. So, a romantic stroll around the grimy environs of Shoreditch it was. 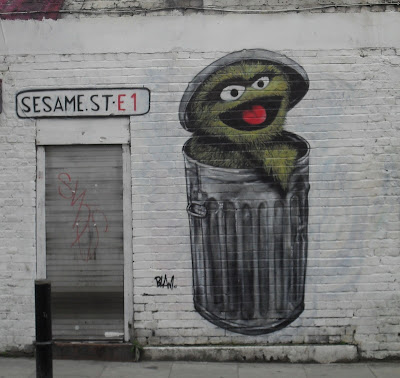 I hadn't been to Spitalfields Market for absolutely ages, and was pleased to discover that although it was a Tuesday, stall holders were setting up and it wasn't just the shops around the edges which were open. There are some really nice pitches there, and the stall holders were all friendly. I bought this necklace from a charming Afghani man with a great sales patter, although I may have a go at making these myself - they're basically just scarf material stitched into a tube, and the material alternately threaded through and covering the beads. 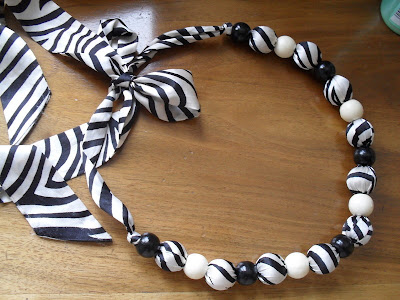 necklace / hair band / belt
I also picked up these photo prints of vintage Vogue covers, which I'm going to put up in the bedroom. They also had photographs of local street art and landmarks, but we've been taking our own shots of those to mount and frame. 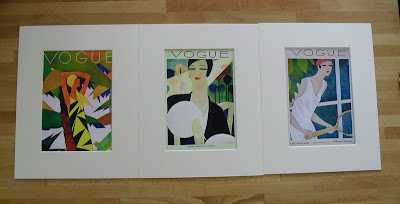 The best stall for me though was the one selling antiquarian books, especially given all my whinging about London vintage prices these days. I know that old books like this are probably not going to provide a pension, but the most I paid was £4, and that was for the Partridge's Children's Annual dating from 1922. The other hardbacks were £3 each, and all have their beautiful colour plates intact and the binding is in pretty good condition considering their age. A similar book would cost between £12 and £25 on Ebay. I kept expecting the seller to say that he'd made a mistake with the pricing! 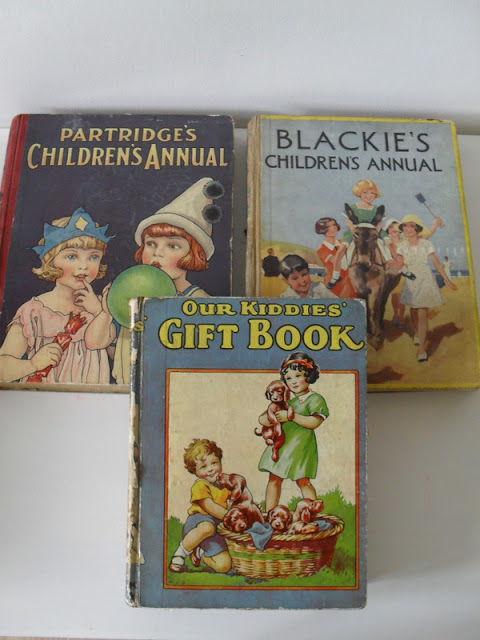 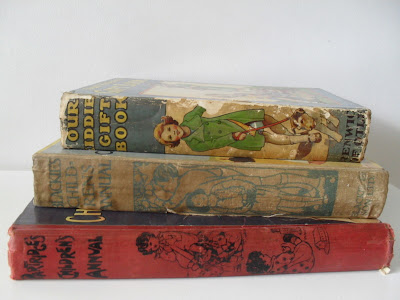 I also picked up the book below for £1, it's the second part of a poetry anthology for children, originally published in 1906. I'm not sure when this little paper back edition came out - it was possibly a school textbox - but probably not much later, it includes all the press reviews from 1906, and was priced at 'threepence'. I'd love the hardback original one day, if anyone comes across it! 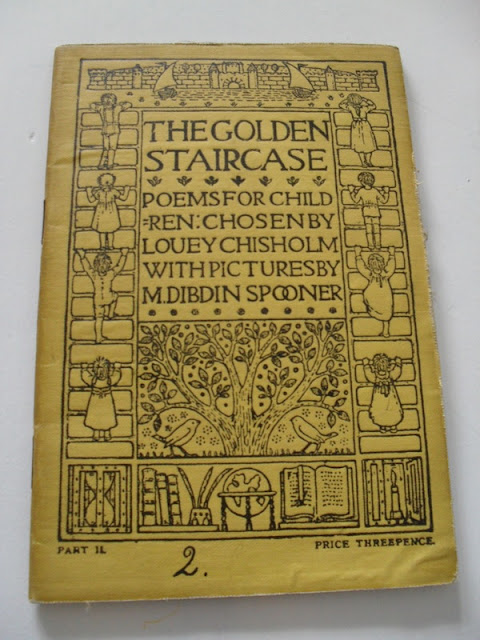 Like my dad and I, my eldest is a big fan of poetry, so it's been nice to be able to share some of the poems thought suitable for children 100+ years ago. It includes a frankly terrifying one called The Dreadful Story of Harriet and the Matches, which should possibly be read in schools round Guy Fawkes night:
"And see! Oh! what a dreadful thing!
The fire has caught her apron-string;
Her apron burns, her arms, her hair;
She burns all over, everywhere.
...So she was burnt , with all her clothes,
And arms, and hands, and eyes and nose:
Till she had nothing more to lose
Except her little scarlet shoes;
And nothing else but these were found
Among her ashes on the ground."
(Heinrich Hoffman)
I also felt for the narrator of Little Girls - "If no-one ever marries me - / And I don't see why they should,/ For nurse says I'm not pretty / And I'm seldom very good" - and enjoyed A Boy's Aspirations, which listed a four year old's ideas for when he was 'quite old':
"I'll never go to bed until twelve o'clock;
I'll make a mud pie in a clean frock;
I'll whip naughty boys with a new birch;
I'll take my guinea-pig always to church;
...I'll never stand up to show that I'm grown;
No-one shall say to me, 'Don't throw a stone!'
I'll drop my butter'd toast on the new chintz;
I'll have no governess giving her hints!"
(Menella Bute Smedley)
The fashion and schooling may have changed, but the general defiance and mess seems to have stayed the same!
Anyway, enough of the English lit (my degree, sorry) and on to the shops! As well as being the old Jewish quarter - a famous 24 hr bagel bakery still survives, and is the best food for under a pound in the area - and current heartland of the Bangladeshi community in London, Brick Lane is also home to probably the largest concentration of London's vintage and retro shops in one area. 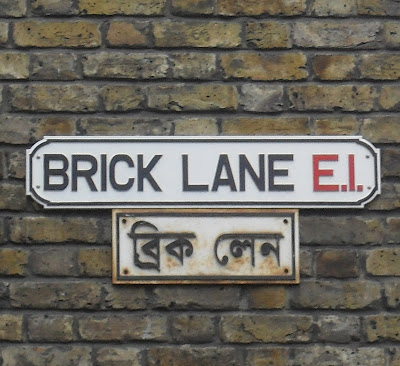 Of course, a lot of what's on offer it is overpriced, but if you can't find what you're looking for here, you're probably not trying. Each shop has a different vibe, and some are certainly friendlier than others. Absolute Vintage is a famous one, although to my mind I'd rather work through a charity shop and hope to strike lucky than rummage in this place. So much of the stock is battered and filthy, yet they treat the customers as though they are offering them a rare glimpse at top secret couture designs for next season. There are signs everywhere warning you against filming, photography and even drawing; and I saw staff going through someone's phone to delete a quick snap taken of a bag. I'm sure plenty of fashion students come in, hence the 'no sketching' rule, but I can't imagine they clutter the place up that much, and surely are just the type of people who would be regular customers. I wouldn't be surprised to see 'No Looking' signs next time, and felt guilty using my eyes to, y'know, observe the merchandise. They do have a vast array of vintage shoes though, arranged by size, which is always handy.
Other good shops are This Shop Rocks, which had a 50% off sale, and a cluttered basement area with unsorted bric-a-brac as well as clothes  (I found something for my swap partner Amy here) and The Vintage Emporium and Coffee House. This has mainly antique clothes downstairs - Victorian to 1930s, including a selection of furs, if that's your thing - and a Coffee and Tea room upstairs, filled with antiques. Then there's Rokit, which is the polar opposite of Absolute Vintage, and has washed/dry-cleaned and labelled everything. Ok, you may lose the thrill of the chase somewhat, but they do have lovely stock, and the clothes prices aren't that bad really (although the jewellery is very over-priced). The staff are far nicer too! I found this late 60s Woodstock style top there, which may form part of my outfit for friends' 60s themed wedding in August. I've just mentioned a small selection of the vintage places, there are many more! I'll share some more street art and graffiti pictures in another post, but here's some of the illustrations out of the children's books I bought. Most of the stories are equally charming, although it still comes as a shock to come across the odd story or rhyme featuring the unenlightened attitudes of the time. Obviously I don't want my boys learning certain racial slurs, so unfortunately they can't be for general reading. I'm still looking for prints to frame, but as these are in such good condition I think I'll scan them and print them rather than take them out of the books. 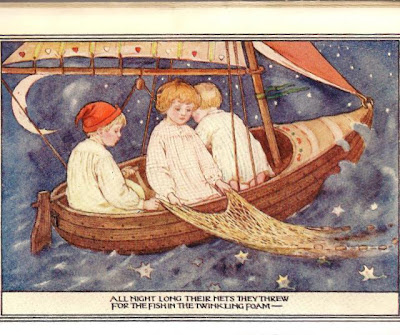 From The Golden Staircase, illustration for Wynken, Blynken and Nod 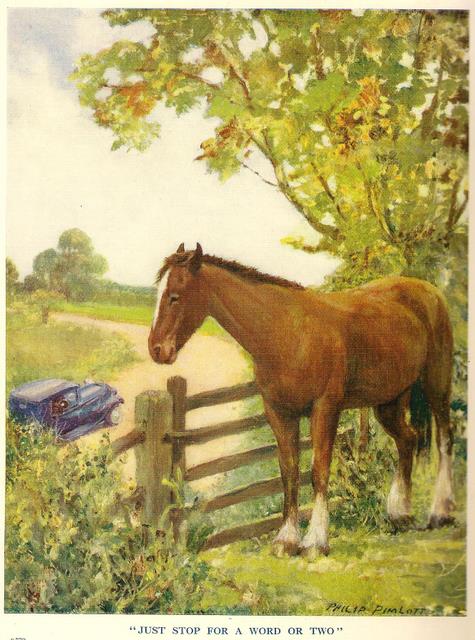 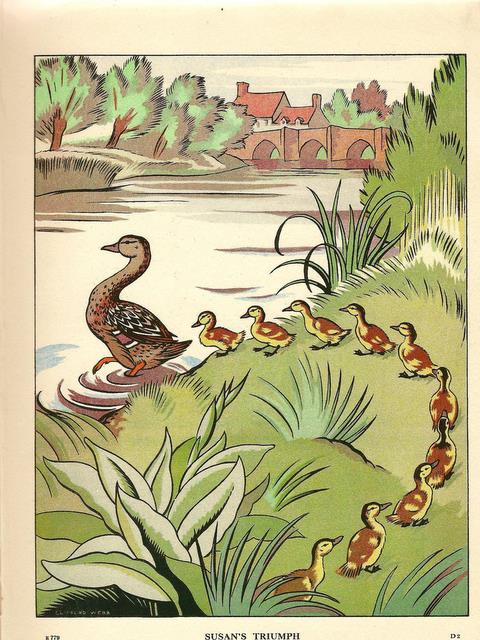 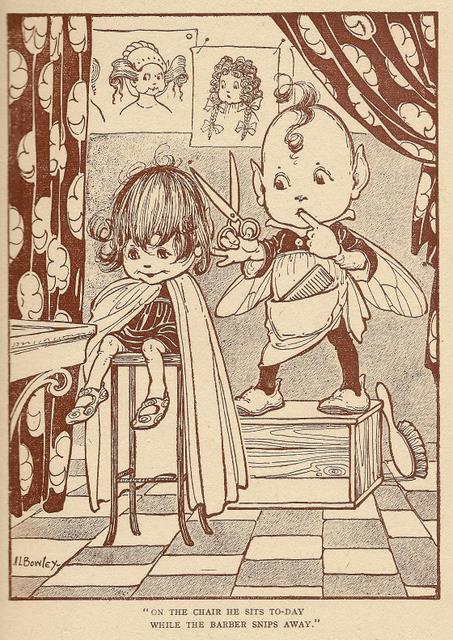 Illustration to a rhyme called 'Tangled' which made me laugh as it reminds me of my 3 year old
who's just been for yet another haircut.
Lakota x
PS. I've had loads of comments about people sorry to have missed the swap. If everyone's up for it, maybe we could do another around Christmas?
Linking up to Flea Market Finds
Magpie Monday
Thrift Share Monday
Nifty Thrifty Tuesday
Posted by Lakota [Faith Hope and Charity Shopping] at 08:32