Ta-dah! Tuesday - Felt Flower Make, and where not to shop

I've been a bad blogger again this week. I'm not entirely sure where it's gone but I know it involved the realisation that children have an unerring ability to spend eight hours in central London stuffing their faces, yet somehow save all their vomit until they reach the first carpeted space in your home. [The stairs, all of four seconds from my front door. Clearly I need to teach him how to puke in Leicester Square like Mummy used to a tourist.] I would recommend you avoid the Turkish Delight/Pizza Express kids' meal combo and stick to laughing at the skateboarders stacking it on the South Bank.

I have also had my tarot cards read by our very mystic chola bad-ass La Dama over at her new Etsy shop GoldenLuz. [Yes, world domination beckons for us both. Be afraid]. Oh, and I also met the world's rudest and quite possibly most insane shopkeeper. [No, not La Dama]. It was one of those occasions where you are completely blind-sided by someone's bizarre behaviour, up to the point that you have to keep checking you didn't accidentally kill their kitten.

Basically, if you're ever in Cecil Court, and your eye is caught by a shop called T. Alena Brett, don't begin, as I did, to look innocently through the 'antique prints' (aka bits of old newspaper with a mount) she has stacked in boxes outside her shop. It began with the owner coming out and huffily moving the box I was looking through (where she'd put it) slightly to the left, as "this is how the shop works". 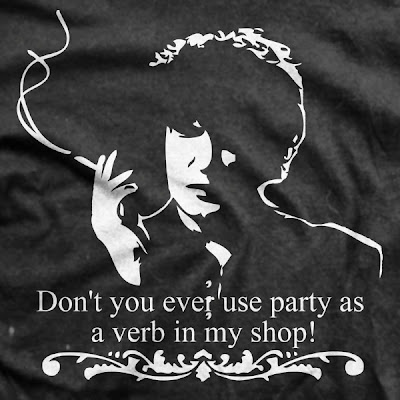 "OK" I say, a bit bemused, and continue looking. She mutters something about boxes falling on me, and sounds put out with customers in general, and disappears back inside. Two complete strangers exchange glances with me and we all do the internationally recognised 'wtf?' shrug.

I continue flipping through and find a 19th century horse-racing print I think my aunt and uncle might like. Mr FHCS and the kids turn up, but don't touch anything [Remember we're in the street anyway]. The owner re-materialises instantly, and starts ranting about how there are more prints in the window, and that she has a slipped disc, so can I move. I point out that I'm where she moved me, and that there's no need to shout at me.

This sends her completely over the edge, and she snatches the print away from me, hissing that her father has just died and she doesn't need this, and she doesn't have to sell to me. She doesn't need to apparently, as she has "the most famous shop in London", and is so beloved that "people give her gifts" - pointing wildly at the amber necklace she's wearing. She gestures at the boys and says "AND I teach children in my shop! How about that?". At this point I appear to have entered an episode of Black Books (a UK show about a drunken misanthropic second-hand bookseller who hates actually selling any books)  but oddly it's less amusing when it's actually happening to you. We leave quickly in case she morphs into Basil Fawlty and starts goose-stepping down the street and shouting about the war.

Having come home and googled her, I found it's not just me she's taken exception to. I had been willing to give her the benefit of the doubt if she was recently bereaved - but from reading remarks from other people who've had run ins with her, she's been claiming the recent death of her father for at least two years! I guess her regular jewellery buying patrons are keeping the shop afloat, because she's certainly not wooing the passing trade!

Anyway, enough of how to make friends and influence people, and on to my make for the week. I got bored of watching England struggle to keep the ball the other night, so made myself this dahlia brooch instead. The original tutorial is by the very clever and crafty Megan Reardon over at Holidash, and if you click over there you'll notice that her version is far superior to mine. However, my latest attempt is a vast improvement on my first attempt, which looked more like a squashed red cabbage than a dahlia. I'm quite pleased with this latest hot pink version. [I didn't bother with making a pocket on the back to keep a picture of a loved one, cos that's just not how I roll. But you could, if you're sappy like that]. Pretty cool though, huh? 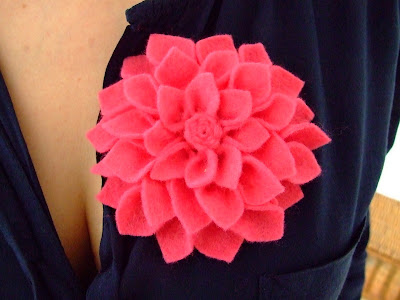 Do link up your latest makes and outfits and what have you, and let me know any other shops to avoid while you're at it. Please remember to link back to Ta-dah! Tuesday in your post. 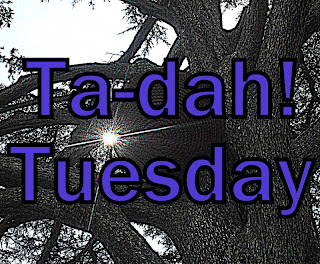 PS. There's a jubilee linky here - please join up if you've finished your swap.
Posted by Lakota [Faith Hope and Charity Shopping] at 07:45