Cookie cutters are great aren't they? Well, some are. Some are just a bit rubbish. I found this random selection in a charity shop a few weeks ago - yes, I know I already bought a load here, but I can't help myself, they call to me - however to be honest they're a bit of a mixed bag. 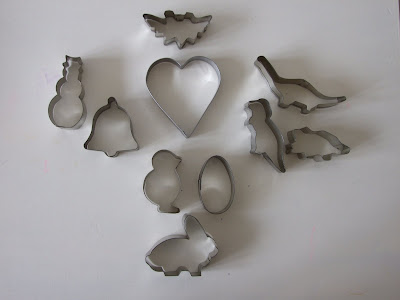 Hmm, lets see shall we? Heart - yes, yes very pretty, have several already, should have no excuse not to be presenting my loved ones with intricately decorated tokens of adoration on a daily basis, in practise make an appearance once a year for Valentine's day. This Christmas they are all being rounded up, having gingham ribbon tied round them, and being used as shabby chic decorations on the tree. Cox and Cox or RE: would probably charge a fortune for 'vintage upcycled ornaments' like that. Bell and Snowman, so far so seasonal. I have a feeling that once baked the snowman is going to look more like the Yuletide cello - the proof will be in the festive pudding. Egg has great potential for garish decoration with dolly mixtures at Easter despite its boringly functional shape, so also a keeper. The flat-footed rabbit and chick wearing Alexa Chung's brogues can keep it company.

At the top you'll see what I excitedly decided was a vampire bat - look at him dramatically swooping above the heart - but have sadly come to realise is in fact another member of the really crap dinosaur gang on the right. Aren't they hopeless? Boy1 went through an exhaustive and exhausting dinosaur phase a couple of years ago so I already have a set of prehistoric pals - far better and more terrifying than this shower, whom I only really identified because of the brontosaurus, which seemed more likely than manta-ray. Or mis-shapen orang-utan. Turn the 'bat' right way up and he's supposed to be a stegosaurus, although it could pass as a porcupine. The T-Rex looks more like a parrot, and God only knows what the other one is meant to represent. Boy1 suggested a chasmosaurus, and I bow to his superior knowledge. Anyway, if anyone wants the dino trio let me know - bat boy has had species re-assignment and is staying with mama for Halloween.

£1.95 for the above would have been a little disappointing if it hadn't been for the awesomeness below - the jewel in the crown of my cookie cutter collection so far. Ladies and gentlemen - I give you...the CRAB. 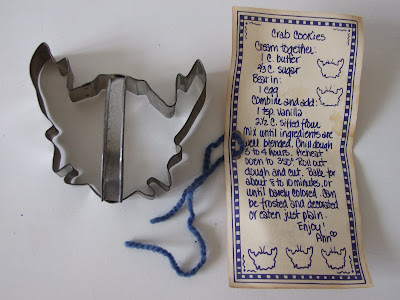 Look at his mighty pincers! Now that's a cookie cutter. Perfect for grumpy old neighbours, Cancerian birthdays and meetings of the local STD clinic. And it has come all the way from the US of A, with Ann Clark's Crab Cookies recipe still tied to it. Of course, if I ever get round to dressing either of the kids up like this, they'll be the perfect accompaniment! I've not read my horoscope, but I predict an afternoon of crustacean based baking coming up very soon!
Over and out, crab fans!
Lakota x