﻿So, I know this goes against some unwritten law of blogging (like saying the Cath Kidston shop makes my eyeballs bleed) but honestly, I think tea is Satan's own wee. Really people, it's grim. This is a shame, as I can totally appreciate the appeal of a cute teapot or a chintzy teacup, and I'd really like to have a proper excuse to fill the house with art deco teasets. Teacup candles to the rescue! It gives me a reason to buy pretty china, and they make great girly presents as well. I was always a bit put off by talk of double boilers, wick pins and crimping tools, but yay - none of these are necessary.
Also, if you make one and aren't happy with it, you can just chop up the wax and use it again, even if you've already started burning it. Here is one I hacked up again after practising in a cup that was missing its saucer.
They don't need a saucer, but it will protect your surfaces and gives somewhere handy to put matches. 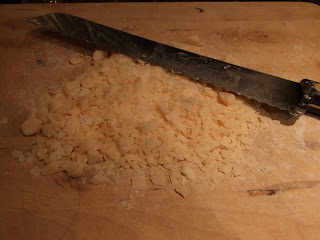 To be completely thrifty you can even melt down old candle stubs, but do try and remove any blackened bits of sooty wick, or the finished result isn't going to be that pretty. You can get starter kits on eBay which include wax, retainers, a length of wick, and a wick pin. The one I bought came with dye as well, but I prefer natural coloured wax.
You will need
What to do
First weigh your empty teacup. Then fill it with water and weigh it again. The difference is approximately the weight of wax that you'll need. Put the wax into the jug, and the jug into a few inches of  just boiled water in a pan over a low heat on the stove. Keep an eye on it, as obviously wax is flammable. Stir around with a wooden spoon as it begins to melt. 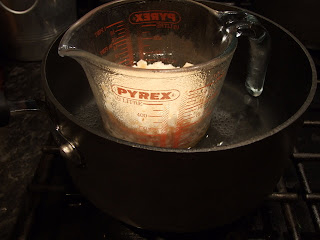 Meanwhile, get a length of wick and poke one end through the hole in the sustainer. Some instructions will tell you to 'prime' the wick first by dipping the length into the melted wax. It doesn't appear to be vital, but you can if you like. Use pliers to squish it together and hold the wick in place. Use glue to attach sustainer to centre of teacup, and then skewers or similar to hold wick straight. You could tie the wick around the skewer to keep it upright, but you do waste more that way. It should look something like this: 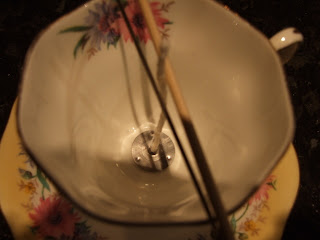 ﻿
Once the wax is molten add any fragrance as per the instructions on the bottle. I was a bit gung-ho with mine and just sloshed it in until it smelled nice, but this is probably not advice to follow. Then carefully pour into the cup - making sure the wick remains central - and leave to set overnight.
﻿ 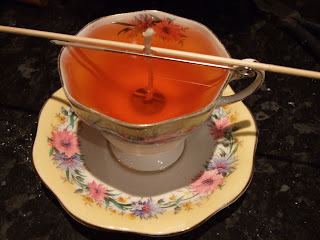 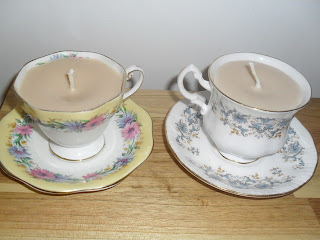 The two above are going to be presents, so in true Blue Peter style - here's one I made earlier. 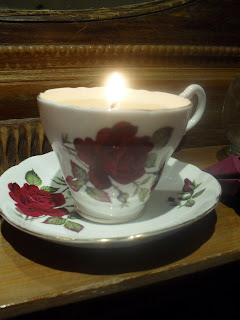 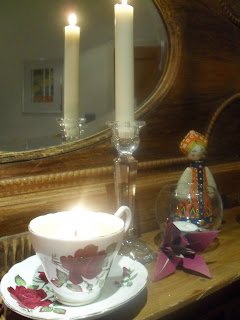 The cup above cost £1.00 from Oxfam, and the total cost of the wax including postage was £9.25. However, this made 6 candles in total. Alternatively, you could go to Liberty and pay £36.00!


This project also forms part of my submission to The Felt Fairy's Monthly Make challenge for February.
Posted by Lakota [Faith Hope and Charity Shopping] at 08:08