Limerick, or the good, the bad and the ugly of charity shops

Dia Dhuit! It's been a few weeks since I managed to sneak a few days away in Ireland, so thought I'd better write up the post before I completely forget what I did. Mr FHCS had meetings to go to on the Friday, so I had a full day - and full stomach after a full Irish breakfast - to wander around the town and amuse myself. Limerick is really quite small, and our hotel was just on the other side of the river and visible from the main road in the centre, so even I with my notoriously terrible sense of direction was unable to get lost. 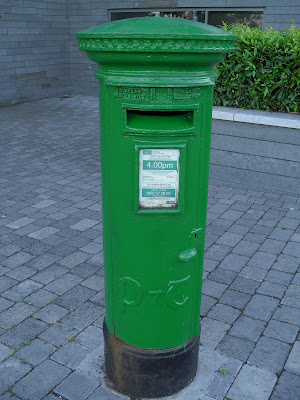 Look! It's green! Truly we are in a foreign land
In addition to such exoticisms as green postboxes, the first thing you notice about Limerick is an incessant beeping noise around the city centre. For some reason the street crossing boxes make a bloody awful noise the whole time, getting faster when when it's safe to cross, unlike the crossings here, where you press the button and wait for the sound to tell you to cross. Now of course I understand that the tone is for blind people who can't see the red and green men, and I guess it's confirmation to the blind that the crossing is actually working - but oh my God it's irritating. Obviously their need is greater than mine, but noise pollution is a pet hate - there must be a better way. At least the view as you cross the bridge into the centre is lovely. Anyway, my Victor Meldrew-isms aside, I settled down to a day of exploring the shops. 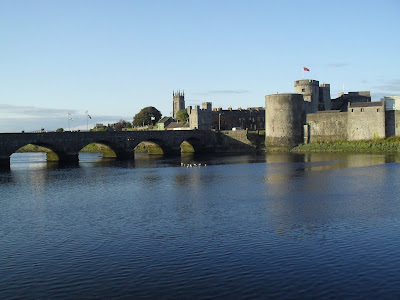 King John's castle, on the banks of the River Shannon
The first shop deserving of a stop was Mr Simms Olde Sweet Shop, which is as you would imagine a dieter's nemesis, where I picked up some chocolate pirate lollies for the boys, some New Berry Fruits for my mum and a hefty slab chocolate covered coconut ice for my Grandad. I'm still pretty amazed that I didn't succumb to buying anything to scoff myself - quite a feat when you consider that I am a great lover of traditional style sugary tooth-rot - anything that will pull out your fillings (or give you more) is good with me. I'm definitely getting white bon-bons next time I'm in a proper sweet shop. 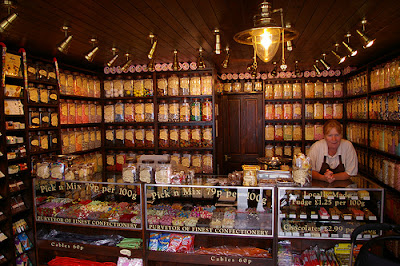 photo thanks to Roisin at I'm Making 'Fetch' Happen
Seeing hoards of girls with paper bags - Ireland has outlawed plastic carriers - outside one shop covered in SALE signs, I stuck my head in to discover that Penneys and Primark are one and the same. I had previously been certain that Croydon was an outright leader in the dubious fake tan stakes, but I'm pleased to announce that in Limerick Penneys orange was being rocked like nowhere else. I did have a quick scan of the 50c jewellery aisle, and found the daisy earrings I wore to the 60s wedding - tacky but bargainous!
On first inspection the general town centre shopping was not especially inspiring, there was the usual array of unexciting clothes stores, a nice but expensive second hand book shop hidden up some stairs, a surprising number of traditional butchers - in fact there seemed to be one on every street, which would have been great if I was after steak or sausages - and of course the ubiquitous pubs. There were quite a few empty retail spaces - the economic downturn does seem to have hit hard in places. A pub next to the castle and the river - surely a prime spot - was boarded up and silent on a sunny weekend afternoon. I sat on the grass outside and imagined the bustling beer garden which should have been there. Hopefully someone will be able to take on the lease and have a successful business before the building becomes too run down and derelict. Some areas had smashed windows and graffiti on the empty buildings, but in others valiant attempts had been made to keep things looking pretty: 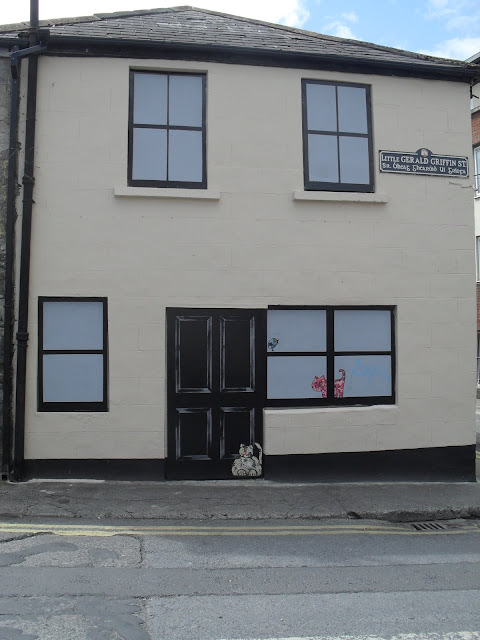 Boarded up house gets its craft on 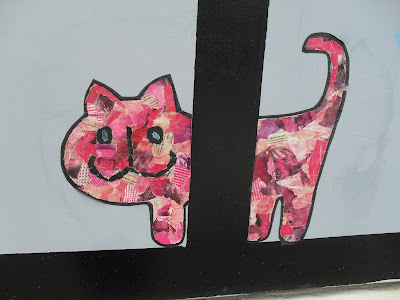 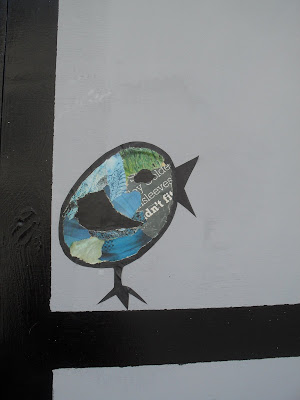 Twitter
However, there is a very nice interiors shop in the Habitat kind of vein called Instore - I might have bought a few things if it were not for Ryan Air's miserly baggage allowance - and the slightly hidden gem is the covered Milk Market. Different days have a different focus, but it's mainly farmer's market type produce, artisan breads and cheeses, crafts and the odd car boot type seller. There are also permanent shops and cafes around the edge, and a stage at one end where a local band were performing.  I chatted to a few sellers, including Ruth Crean - always nice to meet a fellow blogger - who had a lovely stall selling a variety of her handmade items. She also sells her customised and upcycled clothing creations in a local boutique. 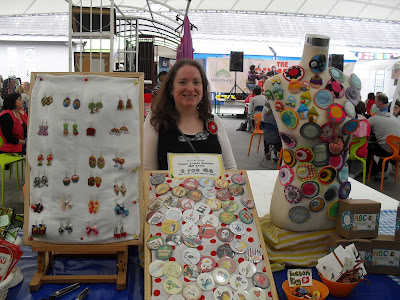 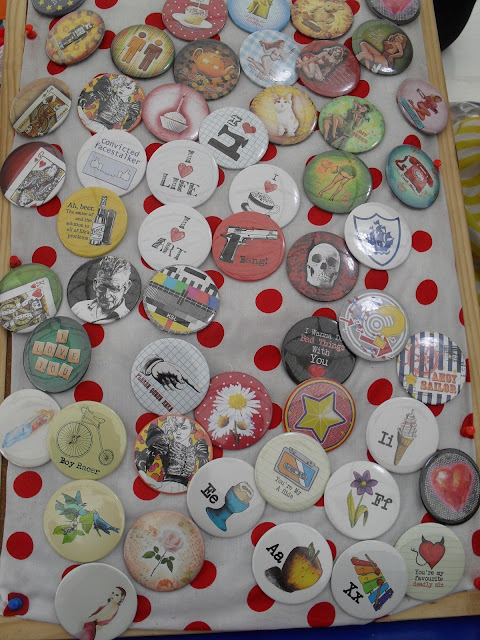 I bought some of these for my badge picture project 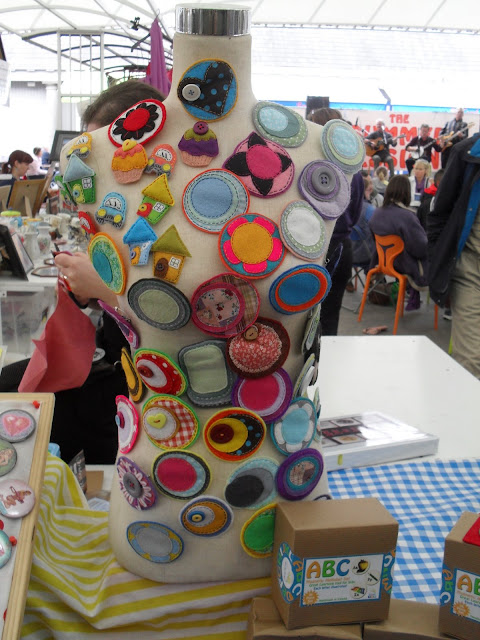 Felt Brooches, with live band in the background 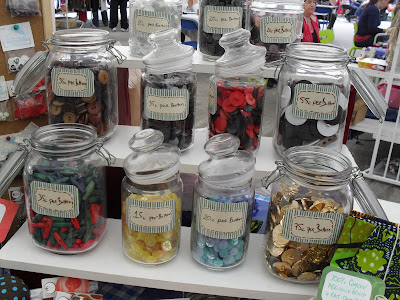 Plenty of buttons, but no bon-bons 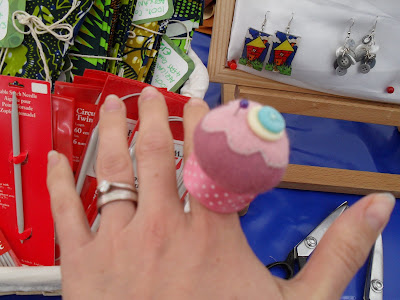 Cupcake pincushion ring.
Of course, I also hunted down the charity shops, and here things ranged - if not from the sublime to the ridiculous - at least from the good to the grotty. Oxfam was the same here as anywhere else, a bit bland and colour co-ordinated and with a sweet but innumerate old lady on the till. [I bought a scarf, and it cost one euro. I gave her one euro. I'm not sure how this became difficult]. Gorta was recommended to me by a girl at the Milk Market, and whilst I know some people will hate its boutique look, the Mary Portas effect hadn't spread to the pricing. There was a rack of clothes in the centre of the shop all priced at 2 euros, and I found plenty to try on. I came away with a nearly new tulip skirt from Full Circle. 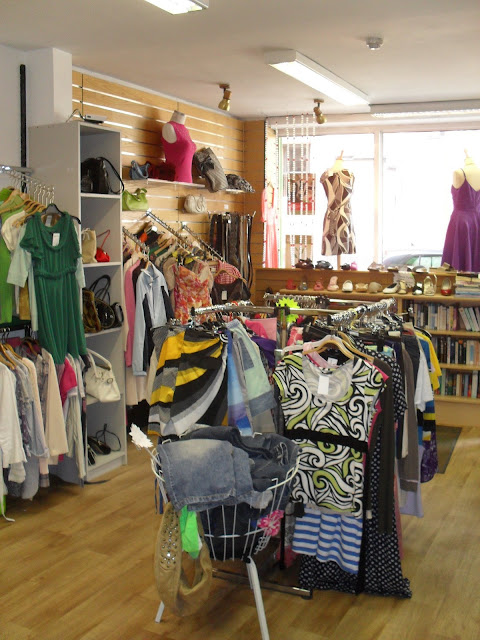 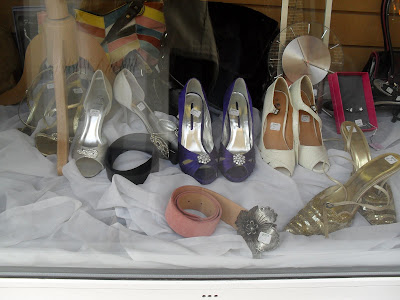 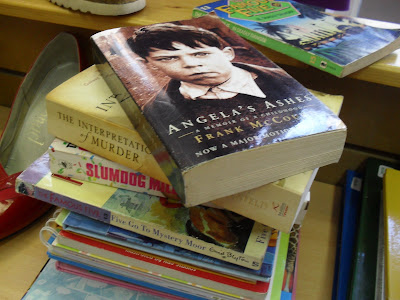 Angela's Ashes. Dead babies and remitting bleakness. The tourist board are still keen though.
I asked the manageress if it had been made compulsory by law for every charity shop in the city to display a copy of Angela's Ashes. [Frank McCourt's best-selling book about a truly dire childhood in 1930s Limerick. Like those horrible exploitative misery memoirs but considered proper literature] She wasn't amused.
On to Mrs Quin's Charity Shop (working for people with sight loss in Ireland). This was more your traditional pile it high and rummage whilst breathing through your mouth kind of place - there was a copy of Angela's Ashes there too - and it reminded me of the grimmest stall at the car-boot sale. You know, the one selling a pile of grey old bras, 2 wire coat hangers and a beanbag which looks like a dog died on it. Run by a woman wearing a fleece with wolves on it who sticks her grimy fingers into a tub of body lotion she received in 1982 in an attempt to persuade you to 'test' it. I was always under the impression that charity shops were told not to sell opened cosmetics, but obviously the memo hadn't reached Mrs Quin's, who were trying to flog a half empty Origins ginger body scrub with added bathroom fluff. Yummy.
The final charity shop I discovered was possibly the oddest of all - at least I've never come across one here that runs on the same lines. Society of St Vincent de Paul (SVP) has shops in the UK - I've never been in one so I can't compare - but this branch had the usual 'good stuff' in the window, accompanied by the following poster: 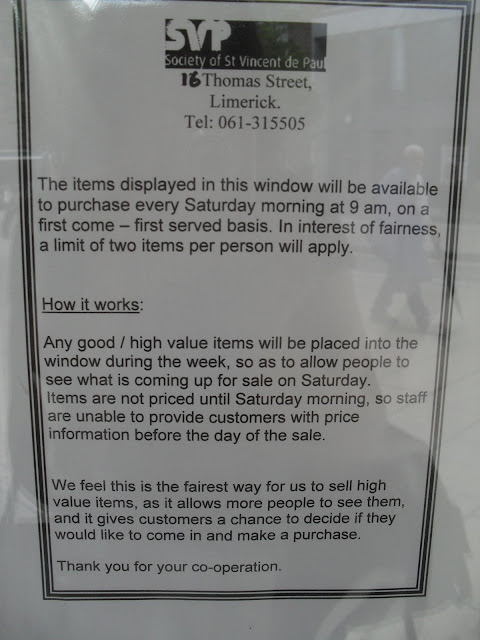 The 'good / high value' items in question included a pair of large gold cherubs, a granny blanket and a bag purporting to be Prada. I'm not all convinced it was - is it just me who thinks all those 90s Prada bags look like they've been bought off a blanket outside a tube station? Luxurious nylon - yay! But regardless, you don't get to find out the price until you've returned on the Saturday! Another wizard wheeze they had was a loyalty card, where you got a stamp for every fiver spent in one transaction. Now that is an idea I could embrace back home... 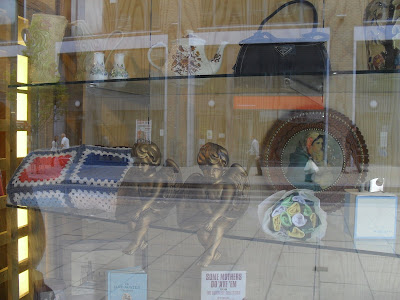 Queues at dawn. Do the cherubs count as one item or two?
Nothing in the window caught my eye enough to warrant a return on the Saturday, but I did buy a couple of belts for 50c each. Does anyone live by a charity shop which has a similar policy? What do you think - good idea or annoying in the extreme? 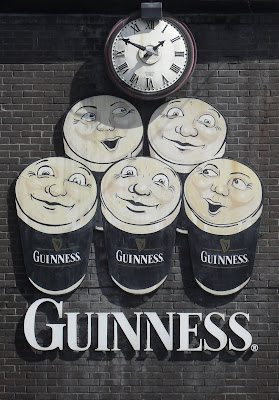 "All I want is a pint of Guinness..."
[as sung by a local busker whilst counting his change]
Sorry, this seems to have turned into a bit of a mammoth post. I'll just leave you with the confirmation that I was indeed little girl number one on the cover of Twinkle  [I'm sure you've all been on the edge of your seats].   I may return to the fringe one day!

Email ThisBlogThis!Share to TwitterShare to FacebookShare to Pinterest
Labels: Limerick