Two years. No, not how long it's been between posts. I've not been that neglectful a blogger. It's actually two years since I started writing the blog. Two hundred and eighteen posts, including this one. Hmm, that probably doesn't sound very impressive to anyone who posts every day. But it's good for me. 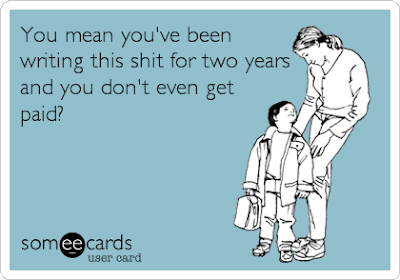 I hope you like how Faith Hope and Charity Shopping has turned out. Things have changed a fair amount as I worked out what I actually like to write about. There are and still will be posts when I find something second hand, but I reached a point where I realised I seemed to be accumulating tat for the sake of writing about it. That has stopped. I am going to make a concerted effort to only buy and write about things I really love. Which work with things I already own. And make the photos come out a little prettier. I am impressed -  in a tooth-grindingly jealous kind of way - with blogs where they manage to make a chipped cup look aspirational. Or an artfully placed spray-painted plastic dinosaur suddenly look amazingly modern. I want to combine my loves of modern design and vintage pieces in my house and my wardrobe, but fear you either have 'it' or you don't. It's a hard look to pull off, especially when half the household would vote for a Star Wars theme, accessorised with discarded socks and hot wheels cars.

Personal style blogs are some of my favourites. When they're good they're very good, but when they're bad...well, they're still entertaining! It's nearly five years post my last baby and only now do I feel as though I am recognising myself in the mirror again. Albeit more bleary eyed. That's quite lame isn't it? What was I doing all that time? Also the wardrobe sort out has revealed that er, I have a lot of designer jeans. And leather jackets. And scarves. This is not very exciting. I like stretchy jersey dresses with a denim jacket. [I'm think I'm overly influenced by people who stopped existing in the 90s. I blame you, Winona Ryder, Bridget Fonda and Jami Gertz]. A male friend recently commented that I haven't really drastically changed my going out look since school. I usually aim for a kind of 'I'm with the band' vibe. I can't do hair, but I'd like to. Still, I'm happy to try things on. Now I'm grown up I miss going to the shops with a friend, where we'd pick out the craziest things on the rails in Miss Selfridge and make each other try them on. I'd be the one who'd buy them. I guess blogs are a good replacement for this. 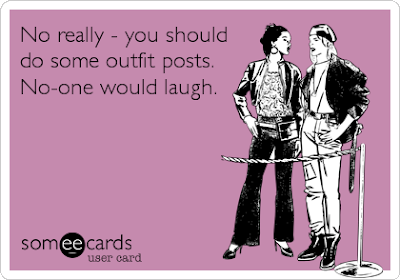 I talk about my kids occasionally, but do not want to be defined as a 'mummy blogger'. If something interests me, I'll write about it, but I'm not going to be a toy/mini breadstick/other random product 'ambassador'. I don't subscribe to any parenting styles and am quite certain I'm doing a lot of it wrong. I am grumpy. I quite frequently shout, and I forget to test Boy1 on his times tables. I threaten to hoover up small toys.* I think my kids are hilarious, but I also love it when they've gone to bed. I'm also well aware that it's all too easy to be very boring about your offpsring. [or pets, for those who haven't procreated. Yes, Captain Fluffypants looks very adorable sleeping on the sofa. As he did in the last 97 photos you put up]

I'm amazingly impressed by people who can really make things. Crocheting a dress. Knitting. Making trousers out of curtains and curtains out of trousers. Furnishing an entire doll's house from lolly sticks. Painting. [However if you crochet a terrifying baby doll I will share it on Facebook and sleep with the light on.] I'll keep putting up my silly craft cheats and glue-gun capers, but I think the fact that one of my most searched projects is a necklace made from two bits of lego says something uncomplimentary about my skill level. I'd like to do more art, it was one of my favourite occupations as a moody teen, although I'm not sure what I'd do with a whole load of charcoal daubings of Kurt Cobain these days.

I like funny. I love music and films and books and laughing about people in the public eye. I like travelling and discovering new places but spending most of my time in cafes and the museum shop. I like the crazy things that normal people make, do and sometimes try to sell on the internet. This is the kind of stuff I like writing about. I would like to meet some more of you this year and not be scared that you'll think I'm not...I don't know, enough. Young enough, old enough, thrifty enough, made up enough, stylish enough. Fuck it. I'll be me. And hopefully that will be enough.

PS. For bloggers who do write well about kids, craft, style, every day life - see my sidebar. <<<<<<<
And cos it's self-indulgent time, here's some of my favourite posts from the last year.

*This is an empty threat. I hate hoovering.
Posted by Lakota [Faith Hope and Charity Shopping] at 13:23

Email ThisBlogThis!Share to TwitterShare to FacebookShare to Pinterest
Labels: blogging, me me me