So, what did you do today? Day at the office and drinks after work? Or school-run and a bit of bargain hunting? I don't do too many 'mum' posts - but I thought I'd share a glimpse into how sometimes life as a parent finds you spending your morning in an alternative fashion - in this case on a friends carpet, trying to identify the contents of lego mini-figure sachets without opening them. Sample conversation was something like this:


"Feel this bit. Does this feel like a banana to you?"

"Could be. Although it could be goggles. Is there a helmet?" 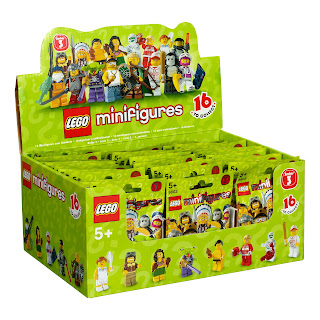 Yes, this is how many we had. An entire shop counter display carton - £120 worth of the little buggers. If you've not played with lego in the last 30 years you might not know that the humble lego man has undergone a style makeover and no longer has the kind of hair formerly sported by Alf from Home and Away. They now come in super cool outfits, with no career or cheery racial stereotype unrepresented! 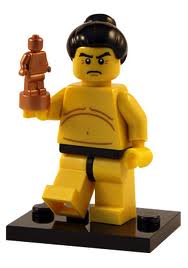 Both my boys are lego crazy and absolutely adore collecting these figures. Each series has 16 different characters but as they come sealed packets, without the benefit of x-ray vision, you don't know what you're getting. The boys swap between themselves, but as the figures are £2 each it's hard to complete the collection once you've got most of the series - we have an army of Egyptian Mummies and my friend's little boy's got enough Beefeaters to form an entire Royal Guard.  My mate Michelle, mum of said little boy, had spent so long feeling the packets in our local toyshop that the proprietor  - presumably feeling uncomfortable with the mad-woman fondling the merchandise - kindly said that she could take the entire box home with her, and then return it the following day with the payment for any she wanted. 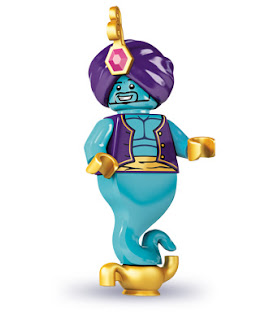 I need the genie - contact me with your swapsie requests ;-)
So obviously, being a sane and rational mother, I only laughed uproariously at her for a moment before joining her in her living room for our training in blind lego identification. Luckily, we'd already established that each figure comes with one unique identifiable piece - whether the hula girl's maracas or the rapper's boom-box - and all it takes is a gallon of coffee, an hour and a half and a packet of post-it notes. Oh, and it would probably help to have a working knowledge of braille. But we were successful! And now I have a whole stash of identified mini-figures to give as rewards for good behaviour, in the goody-bags for the upcoming lego themed birthday party and for decorating the birthday cake. I'm thinking a giant lego brick, displayed on one of those green knobbly base-boards.

If you don't have kids this might seem a ridiculous way to spend your morning, but I feel it takes second place to many times we'd run out of emmantal, favourite cheese of the mini dictator of the day, and I defused the immanent melt-down by hand-carving holes in a slice of cheddar. Obviously I couldn't make it taste like an evil cross between soap and walnuts, but he never seemed to mind, it was all about the aesthetics. And is it only my child who will only deign to eat a banana - the convenient self-packaged, ready to eat fruit - if it's sliced on a plate to be eaten with a fork? 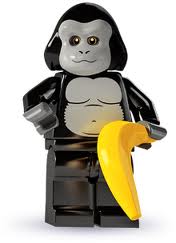 There's a lego man head underneath - he's in a gorilla suit!

Mind you, I'd be lying if I said the morning's escapades were all for the benefit of the offspring. I love the figures too, and would have a collection larger than the boys' if I thought I'd be allowed to keep it (I currently have the Statue of Liberty and the Cave Girl, and am refusing to give them up). Michelle is just as bad, Mr FHCS has them on his desk at work, and I defy anyone who played with lego as a kid - or just likes kitschy cute fashion - not to see the appeal. Of course, mine would be displayed on a shelf like Boy1's, not scattered under-foot or mixed and matched to create mutants a la Toy Story and thoughtfully left in the shower for Mummy to tread on - the hallmark of a Boy2 game.


Series 7 is out this month - I want the hippy, geek and merman; how about you?

What ridiculous thing have you found yourself doing for your kids?


PS. My giveaway ends March 7th - I think I'll throw a mini-figure in too! 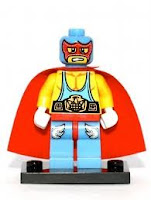 PPS. If you like my blog, I'd love it if you could nominate any of the more amusing posts for the Brit Mums BIB awards - I think the eBay posts have the edge at the moment!
Posted by Lakota [Faith Hope and Charity Shopping] at 00:04