So, picture the scene. You're in a charity shop on the outskirts of Croydon, not famed for its fashionable or wealthy citizens (Kate Moss doesn't count - she moved out years ago). You're flicking absently through the racks of clothes - Primark, BHS, New Look, Primark again, F&F at Tesco, River Island, Galliano... Hang on a minute! Galliano? 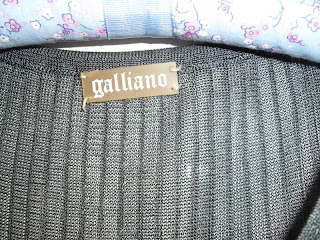 You wonder if it's real - maybe it's some dodgy knock-off? In addition to the rubberized label at the neck, there's a hologram embedded into a label at the seam, always a good sign. There's also a metal tab saying Galliano near the hem, and the front ties are finished with signed metal beads. The dress itself is a sheer fine knit, with a slip to wear underneath, also with label. You look at the price tag - £6.00! That's less than the Oasis dress next to it! You pay and skip to the door. 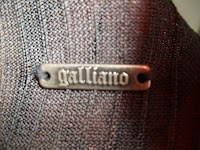 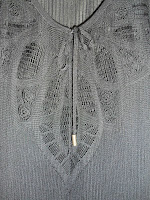 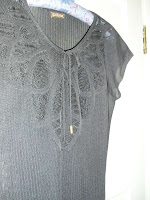 Galliano! Dior! The flamboyance! The theatre! The anti-semitic ranting...oh. Bugger. Thanks a lot John. Best bargain I've had in ages and I'm really not going to feel comfortable wearing it. Ok, so it's not covered in lacy swastikas and I wouldn't be accessorizing with a Hitler moustache whilst goosestepping down the street, but that's not the point. Whilst it seems John Galliano may have been having some kind of drunken break-down (he has Jewish ancestors himself, and is after all gay - never the favourites of the nazis) it didn't excuse Mel Gibson and it doesn't excuse him. It's just a shame that all I have to do to boycott Mel Gibson is not watch any more of his execrable films. 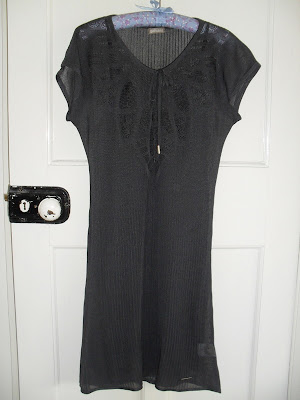 As worn by Mad Max
Second hand shopping is supposed to be ethical, green, an alternative to adding to the waste textile mountain and rivers of pesticides used to produce clothing. I tend not to buy from certain high street retailers who are known to be lax on issues such as child labour and fair pay. A designer find in a charity shop is generally the holy grail - a reward! Next time - if the charity shop gods are listening - I'd like Westwood or Marc Jacobs instead please.

So, what would you do? Does Ebay beckon? Will anyone buy it? As it's second hand it's not like I'm lining Galliano's pockets by selling it. Or do we wait and see what happens at his trial - he's apparently suing for the couple he insulted for defamation - can't imagine how that's going to play out, but could I have judged too soon?

Your comments, as ever, are much appreciated.
Lakota x

Edit Interesting comments so far, mostly the feeling seems to be that it's ok to wear, as it makes him no money directly. However, consider the problem with vintage fur. Yes the animal is long dead, but by wearing it, you're normalising it and it can become aspirational. That is, a friend admires it, can't be bothered to find a vintage coat which doesn't stink of mothballs, and buys new, perpetuating the modern process. I should perhaps also mention that half my family are Jewish... I probably wouldn't have a problem with Dior from his era at the label, I think the crux of it is that I don't want to wear his name. It's not aspirational to me anymore. Does that make sense?

Posted by Lakota [Faith Hope and Charity Shopping] at 20:58