Hello, bit late this morning as we've had a busy weekend away and I hadn't written anything for today's post. But hey, the fact that I did this project all of 10 minutes ago proves that it really is a minute make! I picked up the plain wooden letter 'Z'  - for our surname - at Allders department store for just a couple of quid as they're sadly in administration again. [Although it's good for sale bargains]. The very very elderly motoring atlas of Great Britain was 10p at a boot sale as it was over five decades out of date and completely falling apart.

I found the page with South Wales and simply stuck it down to the letter with decoupage glue before cutting around it with a razor blade. The previous owner of the atlas has made disparaging comments in pencil all around the coast -  for Gower it says 'beautiful bays, popular, but no hotels. Mumbles might be OK if desperate'. Charming! Mind you, some of the B&Bs along the coast road have been there since the ark docked further down the bay. Carmarthan is deemed 'disappointing' and 'useless for visitors as shut on Sundays'. 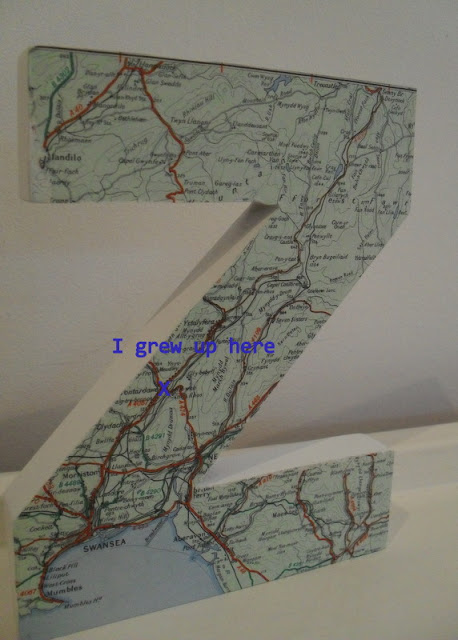 X marks the cultural hub that is Pontardawe. We were the village with a nightclub - a sticky-carpeted mecca for valley boys and girls 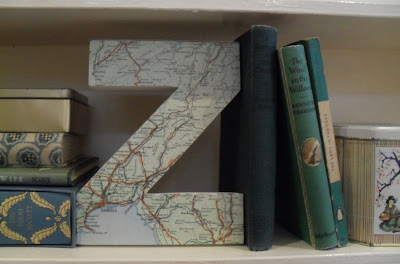 Did you watch the Opening Ceremony for the Olympics? I had a great time with the other half, a bottle of wine and Twitter - it really comes into its own when massive cultural events are televised, even if you're not usually a fan. I thought Danny Boyle did an incredible job, my tongue even removed itself from my cheek on one or two occasions. If you fancy saying hi - I'm @FHCShopping.


Oh, and the Christening was lovely. Sorry to disappoint but Boy2 behaved impeccably in the Church and afterwards, where my sister had laid on enough cakes to feed to the five thousand (most of whom had been invited). The boy of the moment - nephew Gethyn - is a complete doll, although he was happier once out of his Christening gown. It belonged to his great-grandmother, clearly he's not a fan of vintage yet. 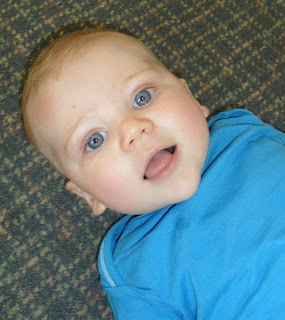 What have you been up too? Link up below as usual.