Hiya, hope those of you to whom half term means anything - whether kids at home or time off work - have had a good one. We had a couple of days in Brighton, or 'Hove, actually' as the bit we stayed in is generally known, and I'm finally beginning to thaw out. When will we ever learn that February half term is NOT the time to attempt to do family mini-breaks? Still, the Siberian snow flurries coming off the sea-front did give us an ideal excuse to spend a lot of time in our favourite galleries and to make regular cake stops at cafes, which is always enjoyable, and we got to spend some time with our nieces. We took the kids to the Sea Life Centre, which is fun - although given that it's housed in a subterranean Victorian arcade - also chilly. I refused to take my gloves off for long enough to take more than a few snaps of Brighton on  my phone - not particularly surprisingly they all fall into my regular subject categories of street art, cake, and random things which strike me as amusing: 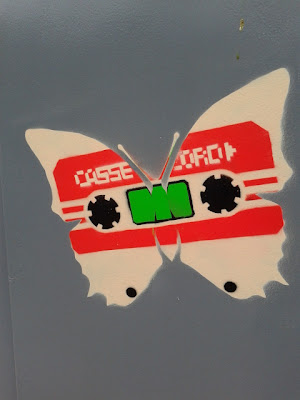 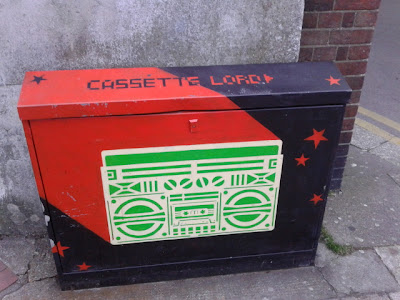 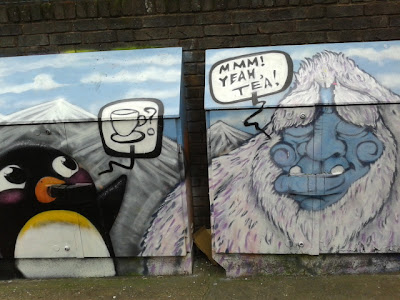 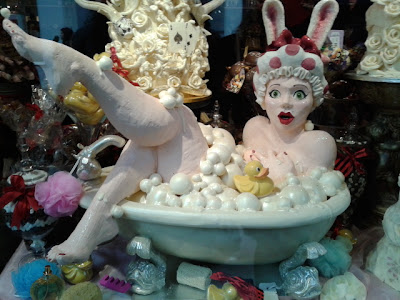 Chocolate sculpture in the window of Choccywoccydoodah
Desiree is that you? 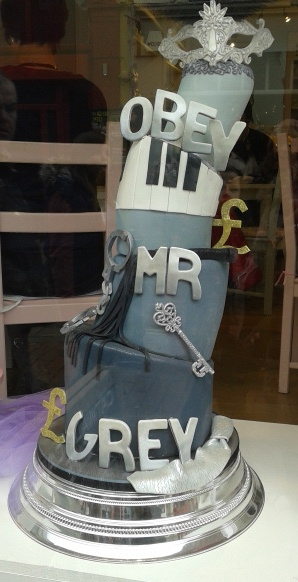 Obey Mr Grey - wedding?? - cake in window of shop in North Laine
Imagine having to explain the theme to your Grandma 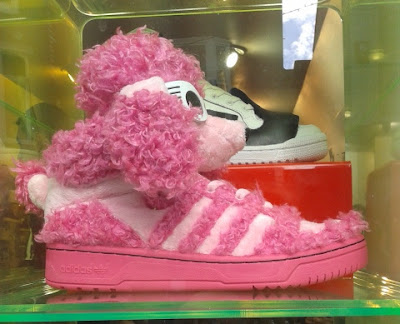 Insane poodle trainers - not by Irregular Choice, but...Adidas!
Krista - what do you think? Tempted?

Speaking of pink haired princesses, I recently met up with the divine Miss Simmonds for a little jaunt round Camden, which mainly involved gossiping, trying on hats, chatting to knicker makers, buying sunglasses - it was pissing down, obviously, but a trip to Camden without buying shades is no trip at all - and a bit of charity shopping. It was less freezing, and I occasionally remembered to get my camera out. 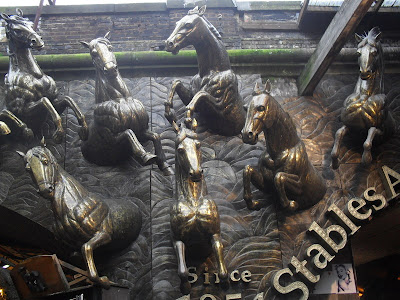 None of these is Clare 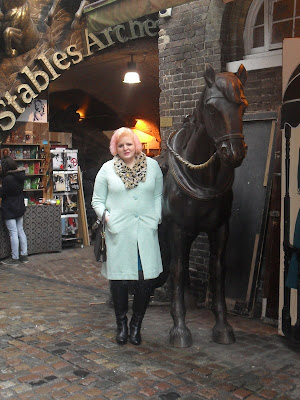 Here she is, next to her faithful steed Glamorous pants, made by 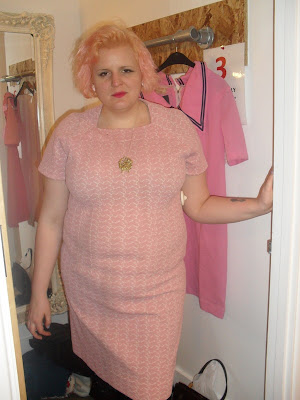 Pretty in Pink in Traid changing rooms
This would have been a great dress if it weren't for all the holes. I think if you're going to try and charge £17 for a second hand home-made garment the shop should at least attempt to mend the several places where it was coming apart at the seams. Unfortunate because it went really well with her hair.

In addition to the cheapy sunglasses I bought some skull print jeans to add some interest to my school run wardrobe, a felt hat from Zara via charity shop for a fiver and a turquoise leopard print vest also from a charity shop. Turquoise and leopard as a combination appeals to me almost as much as the scarf I bought in Brighton - purple! With skulls! Made of flowers! Shame it's polyester chiffon and not particularly warm. I continue to suffer for the sake of rock and roll. Anyway, I don't have photos of this more recent stuff but I have been adding absent-mindedly to a few collections recently so I will link this post up to Magpie Monday - it's been too long. I've got another annual to add to the shelf - a boys' one this time - it's not dated but I think it's late 40s or early 50s, and I also grabbed this mint condition Folio Society copy of The Wind in the Willows for only £2. I'm reading J K Rowling's recent novel for grown-ups (calling it her first adult novel makes it sound like porn) 'The Casual Vacancy' and am quite enjoying it. I didn't fancy paying £20 for it when it came out, despite being a fan of Harry Potter, but £2.50 for the hardback in the Scope shop made it more reasonable. Has anyone read it? What did you think? I must admit to being mildly amused that the central deceased character is called Barry. She must have really cast around for that name! The Eagle Annual has a story set in futuristic 1997, where dashing space rangers have to do an intergalactic Christmas pudding run! 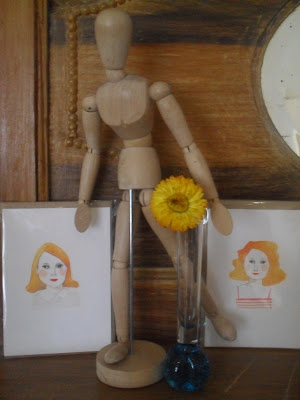 I bought the poseable artist's figure in a local charity shop, and the Czech glass bud vase from a junk shop. I have about 12 now, I just seem to come across them and they're always cheap. The coloured glass bubble bases look really pretty in the sunshine but a lot you see have stains on the plain glass caused by hard water evaporating. I've tried lots of methods of getting rid of this but haven't found a way yet. The red-headed ladies prints are greetings cards made by Anna at Gold Lion Diaries - she kindly included them free when I bought a print for Boy2's room from her Etsy shop. Nice aren't they? I keep meaning to look out for some little frames for them.

I could have bought loads of art when I was in Brighton, spending time in galleries or museums always makes me covetous. I'd quite like Justine Smith's 'Time is Money', if anyone has a spare grand and a half and fancies getting me a present.

I've said it before, but I used to really enjoy art at school, I'd love to get back into it. Much as I enjoyed my English lit course, Clare's talk about art college makes it sound a lot of fun, and seeing all the modern/street inspired art at my favourite gallery Art Republic makes me yearn for a big studio, lots of canvas and some spray paint to play with. Mind you, whenever I go to the Tate Modern I'm convinced I can make my fortune with some shop window dummies, old planks and parcel tape so it's entirely possible I am delusional. 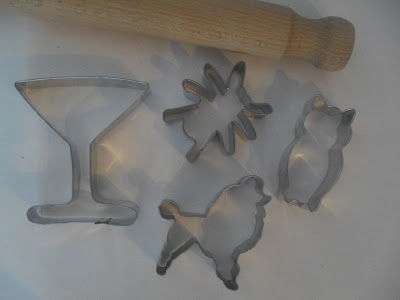 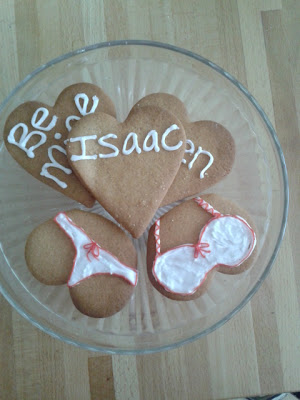 On the subject of cookies, here's some of the ones I made for my boys for Valentine's day - the bra and thong only made it into a grown-up lunch box though, don't worry!

Well I seem to have rambled on for ages, so that should probably do for now. I'll be back tomorrow for Ta-dah! Tuesday, so get ready to link up any finds/makes/bakes/outfits etc that you want to show off!

PS. There are loads of comments I've had recently that I wanted to reply to but I'm still being deluged with spam which Blogger's filter isn't picking up so it's getting hard to pick out the genuine replies. Is anyone else suffering? I really don't want to turn word  verification on.
Posted by Lakota [Faith Hope and Charity Shopping] at 13:51